When it came to my attention that Hollows & Fentimans All Natural Alcoholic Ginger Beer was now available here, one thing came to mind. Find a jerk chicken sandwich! Luckily for me, while walking through Mount Pleasant one day I strolled past “The Tasty Torpedo” food truck and noticed on their awesome menu; “The Ya Mon” Jerk Chicken sandwich and the match was made. 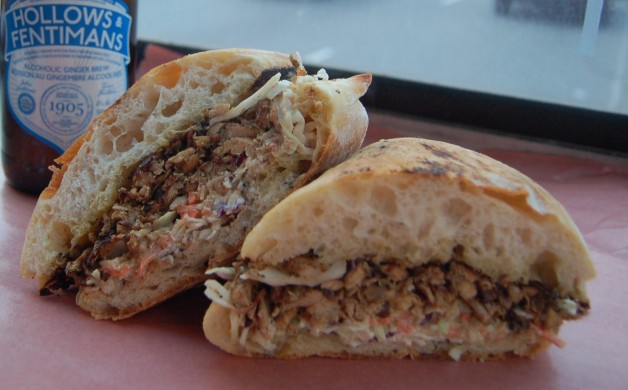 The Tasty Torpedo is somewhat new to the Vancouver food truck scene. They started up in Surrey, but are now hanging out in front of breweries like 33 Acres, Brassneck and Steel & Oak in New West. Their Jamaican Jerk Chicken sandwich comes with ginger and coconut coleslaw and a sweet lime and ginger dressing on organic ciabatta bread. The Jamaican jerk chicken is marinated for about 24 hours in their signature jerk marinade and then grilled skin on till its nicely crisp and a bit charred. They then take the skin off and take all the meat off the bone and roughly chop it, incorporating the skin back into the meat to get all that awesome flavour back in there. This jerk marinade isn’t super spicy, which is good for me, but there is definitely some heat there that is prominent enough so that you know you’re eating some damn fine jerk chicken. The coleslaw is great to calm the heat and the sweetness from the dressing is great balance to the spice as well. All that on the spectacular ciabatta from Granville Island’s A Bread Affair makes for the best jerk chicken sandwich around.

As I stated at the beginning of this post, my hunt for a great jerk chicken sandwich in Vancouver was instigated by the newly available All Natural Alcoholic Ginger Beer by Hollows & Fentimans. This ginger beer is the real thing, using only Chinese ginger root that is fermented for two weeks to create the most easy drinking ginger beer I’ve ever had. What surprised me most about this ginger beer compared to others I’ve had, was the lack of heat from the ginger. The Hollows & Fentimans was much sweeter with a faint warm finish that is much more enjoyable for me. It was precisely this that made the pairing a very good one in my opinion. The ginger beer’s sweetness made for a nice balance of sweet and heat with the jerk chicken. I also enjoyed how the spice from the jerk chicken sat nicely with the subtle heat found in the ginger beer. Based on the tradition of these two things going together I knew this would be good, but it ended up being great!

So if you’re looking for a sandwich that stands alone for it’s taste and uniqueness in this city paired with an authentic and tasty ginger beer then head to The Tasty Torpedo with a Hollows & Fentimans in hand for This Sandwich and That Beer.