Portland is a wicked city. I think it’s safe to assume that anyone that is a fan of craft beer and sandwiches (food in general for that matter) can attest to that. So it makes perfect sense than that Portland hosts one of the premiere food festivals in North America…Feast Portland.

At this years fest one of the marquee events was the “Widmer Brothers Sandwich Invitational Presented by Dave’s Killer Bread”. Just perfect for this blogger. There was no way I was missing this. The event gathered 15 top chefs from around the US, with most being based in Portland to create the greatest sandwich of all. All of these amazing sandwich creations would be washed down with a selections of tasty craft beers from Widmer Brothers Brewing.

Now, lets just get straight to the sandwiches. I feel it necessary to just run through all of them (in no particular order) to give you the reader the chance to drool over each one. Is that cruel?

The Oddfellow Social (PDX): Pressed Water Buffalo Short Rib and Sizchuan Pickled Cucumber Sandwich by Chef Dustin Clark. This was my first sandwich of the night and set the bar high.

Nostrana (PDX): Peach Whim Smoked “Lamb Ham”, Cresenze Cheese, Watercress, Tomato and Spicy Onion Relish by Chef Cathy Whims. This sandwich was the most “standard” sandwich and it was great. It was soft and rich and super tasty. 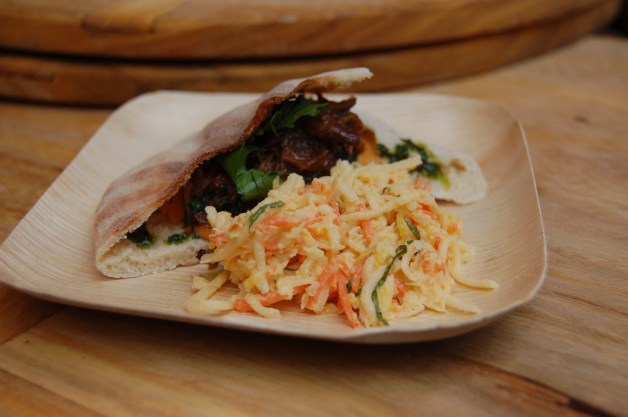 Bunk Sandwiches (PDX): Slow Roasted Duck and Foie Banh Mi by Chef’s Tommy Habetz and Nick Wood. This one was my favourite. Not only because Bunk is my most loved sandwich shop, but because it nailed it on every level. Soft baguette, fatty foie pate, rich slow roasted with zesty acidic pickled veg. Nailed it. 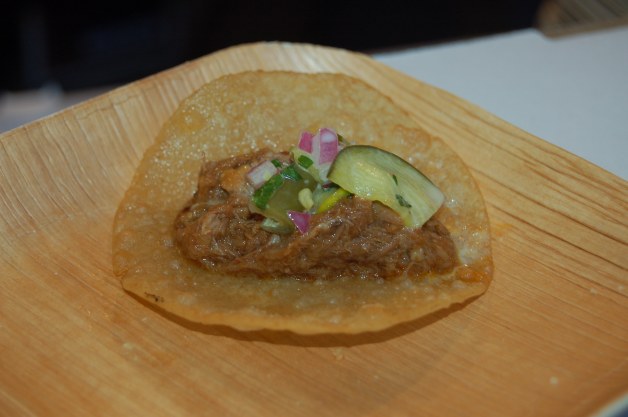 The Bent Brick (PDX): BBQ Goat Frybread by Chef Scott Dolich. Loved the goat flavour on this one but the fry bread was not really my thing/

5 & 10 (ATH): Pimento Cheese Sandwich by Chef Hugh Acheson. Big flavour from the pimento cheese and bread was toasted nicely. Cheese needed to be a bit more melted on mine though. 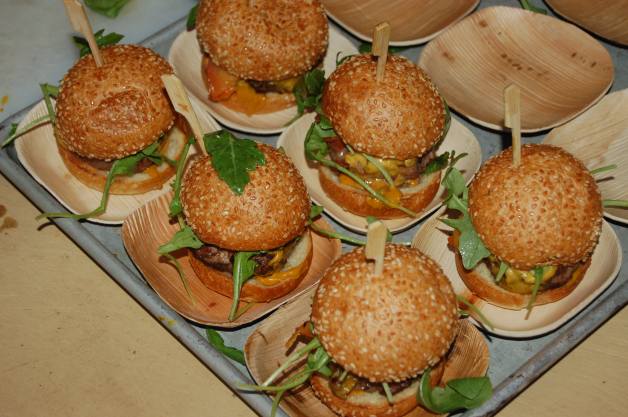 Lardo (PDX): Pork Burger with Dirty Mustard, Peaches, American Cheese and Arugula by Chef Rick Gencarelli. I love burgers. I loved this burger. But a burger is not a sandwich to me. That being said I would eat like 50 more of these. Paired really well with the Widmer Brothers Pilsner being poured next to them.

FT33 (DAL): Bologna and Pimento Chees Sandwich by Chef Matt McCallister. This one was somewhat surprisingly good. Just goes to show that any ingredient given the right attention by a kick ass chef can be delicious. Much better than the bologna and cheese sandwiches in my lunch bag growing up. 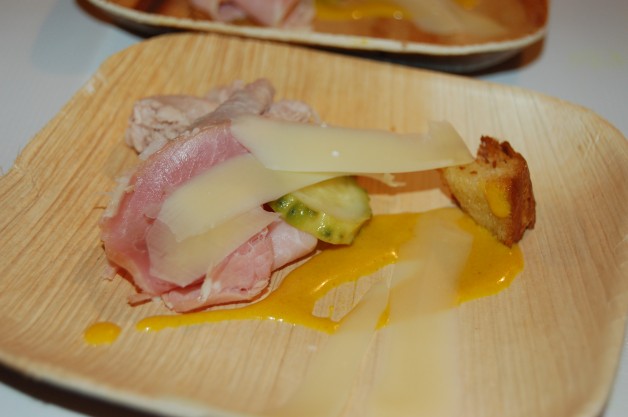 Bar Avignon (PDX): (Deconstructed) Cubano by Chef Eric Joppie. Loved the flavours here. Cubano’s are my favourite sandwich hands down, but I wasn’t sold on this presentation. But I was willing to look past that, based solely on the succulent suckling pig. 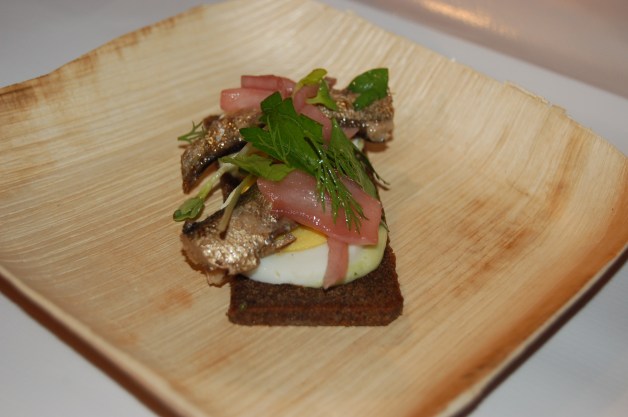 Kachka (PDX): Smoked Sprats, Egg and Smetana on Butter Fried Toast by Bonnie Morales. So bummed that I missed this one, especially considering is took home the night’s prize for best sandwich. 😦

Broder Nord (PDX): Gravlax, Skyr, Pickled Cucumber and Crispy Chicken Skin on Rye Bread by Chef Derek Hanson. This was my last bite of the night. Couldn’t resist that crispy chicken skin, even though I was stuffed. 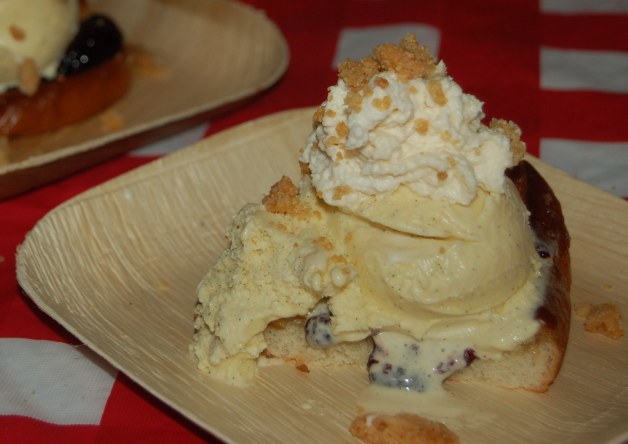 Salt & Straw (PDX): PB&J Ice Cream Sandwich by Chef Tyler Malek. Another one I missed and another winner of the night. But there was no way I was going to be able to take this down. It was huge.

Avec (CHI): “Return of the Gyro” with Pork, Eggplant, Yogurt, “fun”, fenugreek, and “flavor” by Chef Paul Kahan (Photo Credit: Happy Hour Honeys). Missed this one too! But it seemed like a popular table and the guys cooking looked to be having a blast. I’ll hit them up next time I’m in Chicago.

All of the sandwiches I had were top notch with a few standing above the rest in my opinion. I went with my heart (and tastebuds) and voted for the Banh Mi from Bunk Sandwiches as my favourite of the night. After that I enjoyed the Water Buffalo Short Rib from The Oddfellow Social and the Moroccan Lamb Pocketbread from Marche.

In the end there were two winners of the night as voted by the people and the panel of judges. The People’s Choice winner was the PB&J Ice Cream sandwich from Salt & Straw and the best in show went to Kachka for their Smoked Sprats sandwich. Sadly these were two of the three that I missed out on because I was just too damn full. 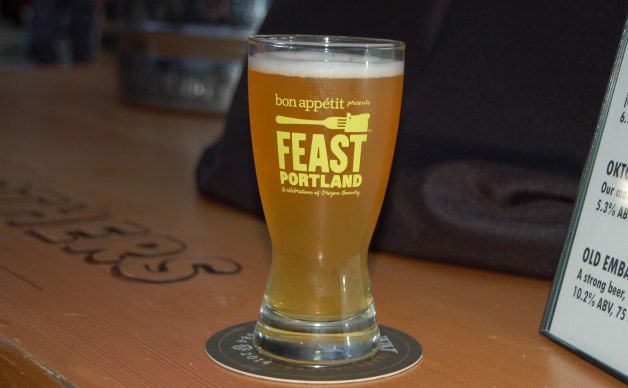 Another big part of the event was the beer as Portland craft beer veterans Widmer Brothers were pouring five tasty beers for everyone to enjoy. On tap were “Krystal Pear” which was the official beer of Feast Portland, the “Hefe”, the “Saison a Fleurs” a collaboration with Breakside Brewing, the “Okto Festival Ale” and the “Old Embalmer Barleywine”.

Last but certainly not least event presenter Dave’s Killer Bread was also on hand with a pretty tasty sandwich creation and to promote and chat with the guests about their awesome product. I had been lucky enough to get a tour of their production facility earlier in the day in Milwaukie, OR.

This event in my opinion was a home run! Seeing so many awesome chefs come together to compete, bringing their amazing talents to make some seriously unreal sandwiches is inspiring. I had a great time at the event and in Portland and will head back soon, and will certainly be back for next years Feast!