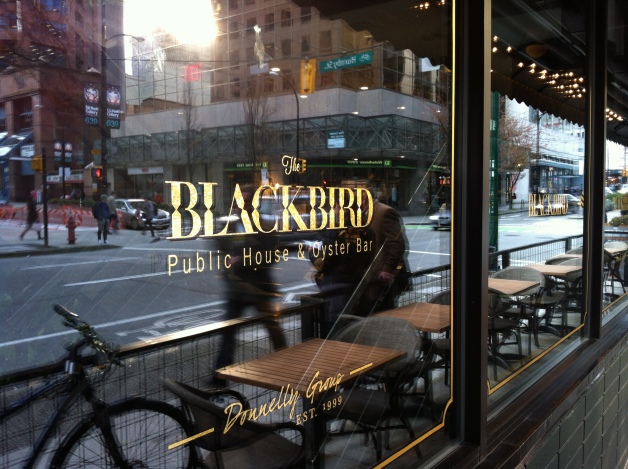 I hadn’t been in to The Blackbird Public House until a couple of months back when I was there for the BC Brewers Guild and BC Distillers fundraising event. Right away I was super impressed with the room and quickly became interested in what their menu had to offer. I chatted at the bar with Donnelly Group’s Excecutive Bartender/Brand Ambassador and super nice dude Jay Jones about coming back again soon for a sandwich and a beer. It wasn’t long after this meeting that I was flicking through photos Instagram and saw Jay post a pic of a new menu item at The Blackbird, The Organic Chicken & Brie sandwich. I messaged him right away to say I was coming in!

The Organic Chicken & Brie sandwich at The Blackbird comes with fresh bay leaf brined and pulled chicken warmed in a succulent chicken gravy, onion relish, Quebec brie and fried onions on artisan sourdough. Right from the first bite, all the flavours come through. The chicken is crazy moist from the long brining process, and with the gravy, the depth of flavour is spectacular with just the right amount of salt. The brie is rich and creamy and is a perfect choice as it melts to become almost like a sauce for the sandwich. While I was eating the sandwich there was something sort of sweet and a bit acidic that really stood out but I just couldn’t put my finger on it. I finally realized that it was the onion relish, which is done in a gastric of vinegar, sugar and mustard seeds. This almost became the star as it was so prominent in every bite. And in a sandwich with so many soft textures the crispy fried onions brought the necessary crunch. Finally the artisan sourdough is just right, nicely toasted and distinct with it’s subtle but familiar sourness.

When it came to the beer pairing I wanted something that could match up nicely with the sweetness that would be coming from the gravy and the brie. They let me know that they had just added their new collaboration Altbier done with Granville Island Brewing to their taplist. I first tried this style while in Germany many years back and really loved it. This Altbier, as is common with the style is malt forward with a fairly low hop flavour. I also picked up some subtle burnt caramel notes on the nose which became more evident with each sip. The first thing I noticed was how the beer and the brie combined, the sweetness in both definitely found each other as I had suspected. The beer’s mouth feel is also quite crisp and finishes clean, cleansing the palate of the richness from the brie and gravy. Overall the pairing worked very well and this Altbier is something I would drink again for sure.

So if you’re looking for a decadent and rich chicken and brie sandwich paired with a great German style Altbier, then head to The Blackbird Public House & Oyster Bar for This Sandwich and That Beer. 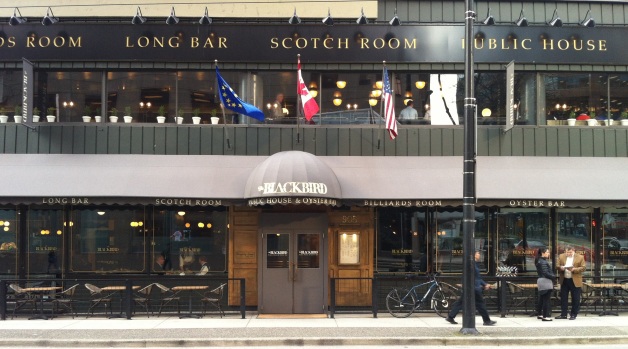 Also, look for my column in the BC Craft Beer News at your local craft beer focused private liquor store.