Just over a year ago, rumours started swirling around a massive new craft beer focused restaurant/taproom that would move into the historic Salt Building in Vancouver’s Olympic Village. Proving the gossip was right, CRAFT Beer Market opened in October of 2013 with over 100 beers on tap and a menu of handcrafted local food, making it a sort of mecca to Vancouver’s growing craft beer scene.

CRAFT puts an emphasis on “fresh local food”, handcrafting all menu items from scratch. The menu features a selection of appetizers, flatbreads, burgers and sandwiches, as well as some signature entrees. I decided to go with the Brewmaster’s Chicken Sandwich; Rossdown Farms chicken breast, avocado, bacon, aged cheddar, tomato, butter lettuce and red onion, served on a grilled ciabatta bun. 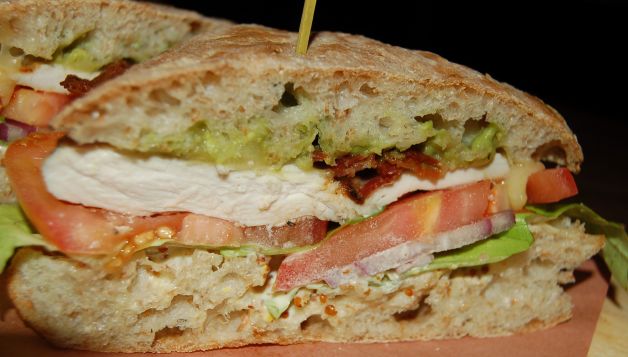 This style of sandwich falls into the ‘classic’ category for me. These ingredients just work together. They make sense; and when they’re all fresh and local, that ‘classic’ becomes elevated. For me, the bacon was the stand out here; it was nice and crisp with a good amount of smokiness. The tomato, butter lettuce and red onion offered up some crunch, while the avocado smoothed out the sharp cheddar. One thing is certain when you decide to dine at CRAFT: you can expect the food to be fresh and consistently tasty.

Now with over 100 taps, the beer choices can be a bit overwhelming, so coming in with an idea of what you want to pair up with your meal can be helpful. One of the things that helped me make a decision was wanting to stay with the idea of ‘local’. Just down the road from CRAFT, you’ll soon find the new Red Truck Beer Company location in Vancouver’s Brewery Creek neighbourhood. This new location is getting closer and closer with each passing week and I can’t wait to check it out when it’s finally open. While I wait patiently for it to open its doors, they continue to brew great beer out of their North Vancouver location.

One beer they’ve been brewing since their inception is their classic Red Truck Ale; a copper-hued ale brewed with a blend of premium Belgian malts, plus Pacific Northwest hop varieties which deliver a wonderful complex aroma and a rich depth of flavour.

The Red Truck Ale has a sweet and subtly spicy aroma; the sweetness came through spectacularly when matched with the sandwiches’ smoky bacon. The beer is definitely malt forward, but finishes clean with a bit of hop flavour coming through. The acidity from grainy mustard in the sandwich found the bitterness in the beer, which also worked well with the avocado.

So, if you’re looking for an elevated classic chicken sandwich paired with a tasty local beer from a place that offering ton to choose from, then head to CRAFT Beer Market for This Sandwich and That Beer.

Also, find my articles in BC Craft Beer News and listen for my feature on Just Here for the Beer radio on Team 1410AM airing in February.